Mayor Hancock announced that property adjacent to Red Rocks Park would be officially designated parkland. [Read press release as pdf.] The announcement was made at the dedication of the Red Rocks National Historic Landmark Wednesday night, July 15, on the 75th anniversary of the original dedication of Red Rocks Amphitheatre.

“At a time when Red Rocks, the jewel of our Mountain Parks system, becomes immortalized in the history of the United States, there’s no more fitting tribute to its legacy in Denver than expanding the experience for residents and visitors,” Mayor Hancock said. “This designation will ensure that even more of the natural landscapes that make this such a distinguished and cherished park will be protected for generations to come.”

Former Mayor Wellington Webb sent a letter outlining the history of the properties acquired by the City in 2000. Four properties, totaling 193 acres, were acquired. Now, after a 16-year wait, one property has been designated as parkland. Formal designation, a result of a 1955 charter amendment, means that use and development of the property will be as parkland, and the property cannot be sold unless city voters approve a change. Webb wrote in support of the designation in March 2003:

As Denver’s mayor from 1991-2003, it was my privilege to embrace Mayor Speer’s vision and carry it into the 21st century. Wherever we could my administration added to and expanded our city’s parkland as opportunities became available.

Red Rocks offered one of those opportunities. … The prospect of an increasing population in the valley would have potentially impacted amphitheatre operations. We saw a once in a lifetime chance to preserve open space near the park and seized an opportunity to acquire the 193 acres.

At sunrise, the property to be designated lies in shadow in the foreground of the amphitheatre. SL White photo.

The property to be designated, known as the Bradley trade parcel, is 98 acres out of the 193 acres acquired in May 2000 and has significant natural values, including native vegetation, wildlife habitat, and rich geology and history, as well as its position as a scenic buffer for the park.

The addition lies east of the current park boundary and south of Entrance 2. The remaining three properties, which are still undesignated, are north of Entrance 2, as shown in red. See complete map.

Denver Parks and Recreation is beginning trail planning for the area. We hope, in the face of increasing threats to the park from the expansion of Amphitheatre operations, development in this new area will be sensitive to preserving the natural values and character of the property.

Early stages of grading for the new road alignment, January 4, 2016.

On the first business day of the new year, heavy equipment started rolling at Red Rocks Park. Several changes had been proposed and discussed in months previous, and Denver Arts & Venues was moving forward. The Upper North Parking Lot was to be paved and reconfigured, the intersection of Alameda Parkway and Trading Post Road would be revised, and Red Rocks Park Road between the Lower South lots was to be straightened to accommodate additional parking.

Representatives from the historic preservation community were particularly critical of this realignment of one of the last historic road segments of the park road system, especially in light of the recent designation of the Park as a National Historic Landmark. The road system is a “contributing feature” to the historic designation, one of the key elements that indicated its qualifications for designation as Colorado’s newest national landmark. 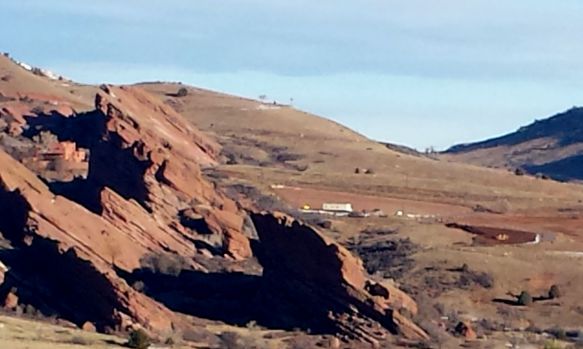 By January 5, 2016, significant progress was made in removing native vegetation and outlining the new road.

“…the proposed work has the potential to impact adversely the significant designed landscape at Red Rocks, including approximately 2000′ of the historic road corridor. The circa-1929 alignment was designed to specifically and deliberately progress through the landscape at this location, and has well withstood over 85 years of use.”
—Astrid Liverman, History Colorado, April 22, 2015

On only the second day of work, January 5, the new road was taking shape.

“Please keep in mind, our review and comments about the improvements should not be construed as any sort of approval for altering the historic road and parking lot features within the nominated NHL. These alterations are discouraged by the National Park Service because they have an adverse effect on the historic site, and should be avoided if at all possible.”
—Tom Keohan, National Park Service, April 2015

By January 22, grading of the new parking area was underway, and work on the intersection to the north was clearly visible as well.

“… we respectfully suggest that any benefit or modest gain in parking to result from the proposal does not warrant the impact to this significant structure. Adverse impacts to the design landscape weaken the integrity of the nationally significant district as a whole.”
— Steve W. Turner, Deputy State Historic Preservation Officer

The Icelantic “Winter on the Rocks” event took place on January 29th. By that time, the new road was graveled as was the entire parking lot. 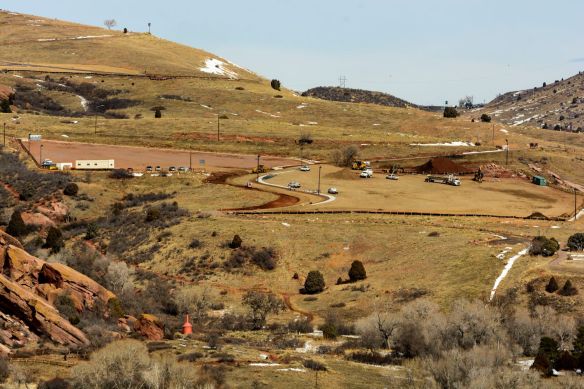 By February 11, the road and parking lot were graveled and sidewalks were in. Cutbanks for the northern intersection were covered with landscape fabric.

Closer view on February 11 shows work underway in preparation for paving, which was completed a day or two later.

“This roadway is listed as a contributing feature of the National Historic Landmark, currently pending approval by the Secretary of Interior. By realigning and straightening the road, the integrity of this contributing feature of the NHL will be adversely affected. … While reasonable people can disagree on the impact of the road relocation, there is consensus in the historic preservation community that the road project will incur unnecessary impacts and should be avoided. … design alternatives were never considered nor analyzed for this project.”
—Kevin Lyles, landscape architect and HALS consultant [emphasis ours]

Despite repeated recommendations from the historic preservation community, Secretary of Interior standards for the treatment of cultural landscapes do not appear to have been followed for this project. Although the National Park Service and the Denver Landmark Preservation Commission reviewed the project early in 2015, neither agency had jurisdiction to require adaptation of the project or consideration of alternatives. Denver Arts & Venues was free to proceed, at the expense of one of Red Rocks Park’s significant historical features. 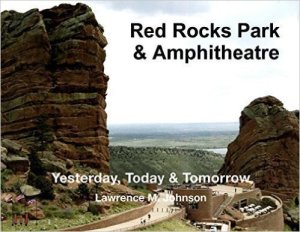 With a brand new National Historic Landmark designation and Tom Noel’s Sacred Stones out of print, it’s time for a new book about Red Rocks Park. Just in time for holiday shopping, Lawrence M. Johnson introduces the latest in his series of Colorado books, Red Rocks Park and Amphitheatre: Yesterday, Today, and Tomorrow. Available on Amazon.com, or at the Red Rocks Trading Post or Visitor Center, this book contains more than 175 historic and “today” photos, and is $24.99 well spent if you’re an admirer of this park or have one on your gift list.

With more than 30 pairs of then/now matchups that will give you new perspective on this beloved park, as well as historic photos not previously published, the book is a nice complement to previous publications: 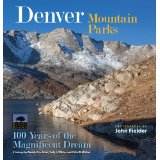 Yesterday, the Horton House Bed and Breakfast was destroyed by an early morning fire. The quaint and popular home has provided lodging to hundreds of concertgoers and other park visitors for many years. Lila Horton, who has long brought historic ambiance to her guests and enhanced their visit to Red Rocks, has lost her home as well as her business. 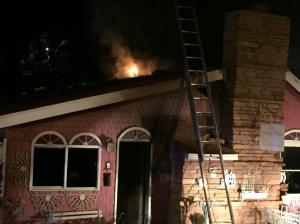 A fund has been established to help Lila and her family recover from their loss. Please visit Go Fund Me if you can help.

Updates are being posted at the Historic Morrison website.

This long process officially began in about 2004 at the suggestion of the Friends of Red Rocks, a nonprofit group formed in 1995 to advocate for the park. The work on the nomination has been carried out by staff and consultants of Denver Parks and Recreation and the regional office of the National Park Service (NPS), and the nomination itself has been through several revisions over the last five years; a “final” version was officially submitted to the NPS in Washington on May 1, 2014.

During the last stages of the process, many groups and individuals wrote letters of support for the designation, including Governor Hickenlooper, History Colorado, Jefferson County Commissioners, the Denver Art Museum, the Denver Mountain Parks Foundation, and Bonnie Raitt. Secretary of State Sally Jewell signed the completed nomination August 4th, bringing the effort to a successful conclusion.

How does this new designation differ from National Register status?

Red Rocks Park District was named to the National Register of Historic Places in 1990, along with several other Denver Mountain Parks. The National Register listing is a process for recognizing historic sites that are usually at least 50 years old, and are significant according to listing criteria, including things like their association with historic people, events, etc. Although nomination and listing on NRHP is a substantial process, nominations are handled by the state historic preservation office before involving the NPS in Washington.

Colorado has more than 1400 sites, buildings, and districts listed on the National Register, but only 24 National Historic Landmarks (Civic Center included) and 14 National Natural Landmarks (Summit Lake Park is one).

Historic Landmarks are automatically listed on the NRHP, but not all NRHP sites are, or are eligible to be, historic landmarks. NHLs have national significance, as opposed to just state or regional significance.

The National Historic Landmark is a much more prestigious and exclusive designation and the nomination process is much more detailed. Although none of these designations confer protection on a property, the landmarks do involve some federal review to ensure the landmarked sites maintain the qualities that make them significant and worthy of this high honor.

On January 27th, 2012, Red Rocks Park hosted the first winter concert in the Amphitheatre’s 75-plus year history. The sold-out event featured performances by Atmosphere and Common and was sponsored by the Icelantic ski company. Fortunately, the weather mostly cooperated, and no major snowstorms crashed the party.

A lightning strike in April 2007 carved a crack in the top of Ship Rock. Because of concerns the 12-ton block would fall into the new Visitor Center, experts decided to break it up into smaller chunks, which then fell harmlessly below. Ship Rock, the Park’s second highest, is now about a foot or two shorter than its stats indicate.

Many other rocks in the Park have been split in this fashion over the millenia. Lightning cracks, followed by wind and water erosion, are one of the elements that give us these spectacular rock formations. Photo by Matt Corey, Arts and Venues Denver.

Crack in the top of Ship Rock, caused by lightning in April 2007. Photo courtesy Matt Corey, Arts and Venues Denver.

All images and text copyright S.L. White, unless otherwise noted. Used by permission, all rights reserved.

This website is not affiliated with Denver Mountain Parks or the City of Denver. They are not responsible for the content or accuracy of any information provided here. Questions on or corrections to content should be directed to the author at mountainparks AT gmail DOT com.